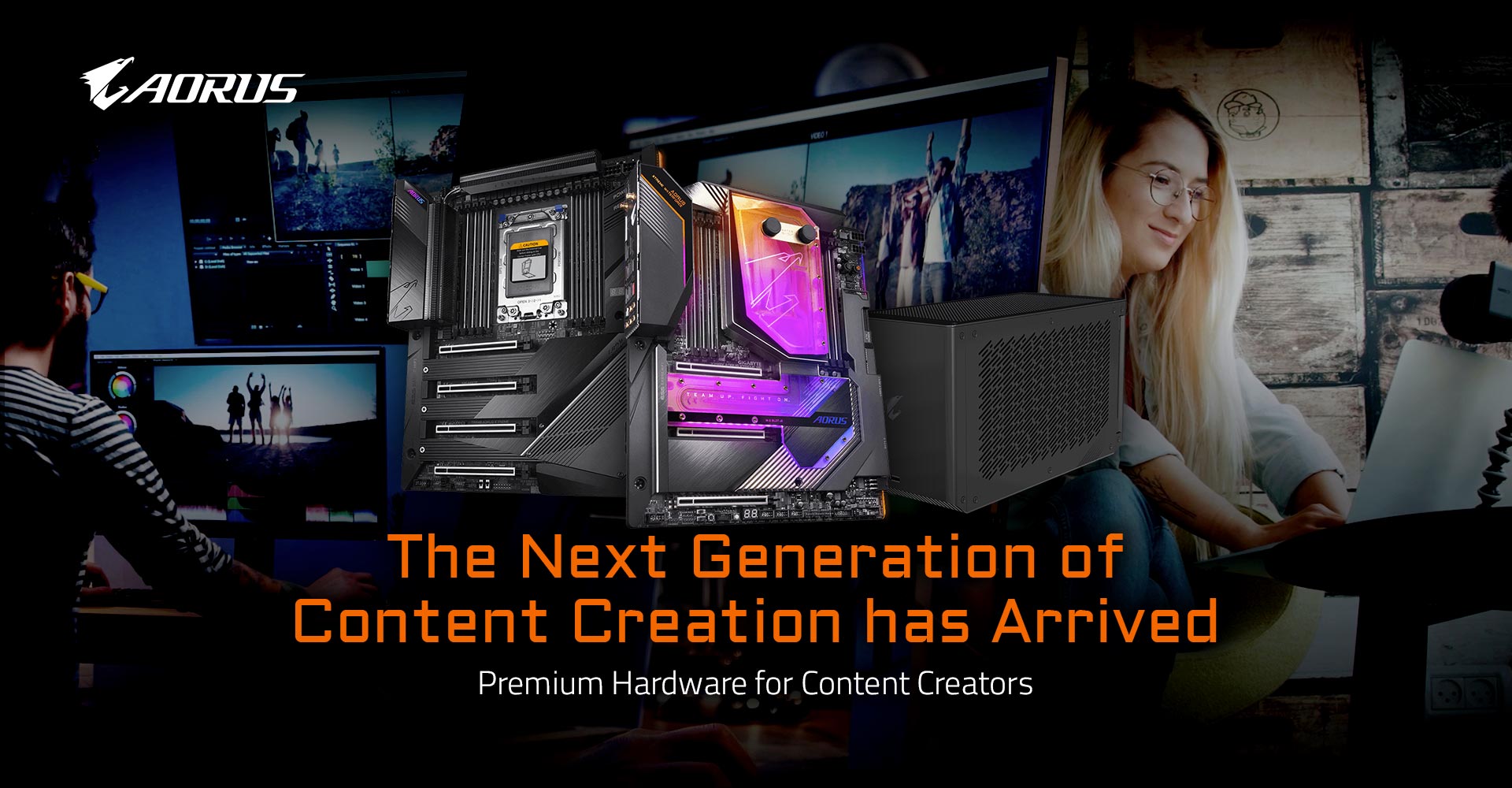 Taipei, Taiwan, November 27th, 2019 – With an aim to serve the growing community of content creators, GIGABYTE TECHNOLOGY Co. Ltd, a leading manufacturer of motherboards and graphics cards, presents a comprehensive lineup of premium PC hardware to provide substantial performance upgrades that caters to the demanding needs of creatives at all skill levels. These offerings include the brand new X299X motherboards by Intel, the newly-launched TRX40 motherboards by AMD, the latest external GPU solution, the AORUS RTX 2080 Ti Gaming Box, and other advanced upgrade options ideal for creators and gaming prosumers in general.

For design professionals and production houses seeking ultra-high-performance computing for content production, the X299X series by Intel and TRX40 by AMD offer a great building block for putting together professional-grade workstations. Both of these motherboards offer some common features that are perfect for creators’ workflows. They both support a high core count of CPUs and up to 256GB of RAM, enabling users to easily handle multi-tasking and memory intensive workloads.

In terms of next-gen connectivity, the X299X AORUS XTREME WATERFORCE and X299X DESIGNARE 10G puts the data transfer process on the fast-track with its built-in Intel® Thunderbolt™ 3 via two USB Type-C™ interfaces for 40 Gb/s bandwidth, which not only saves time but also facilitates transfers of larger files. The X299X DESIGNARE 10G is also the world’s first and only X299 motherboard with both Intel Dual 10Gbe and dual Thunderbolt 3 interfaces, so users will no longer need to install any add-on cards that would otherwise use up the PCIe slots just to get extra connectivity, thereby allowing greater flexibility and better expansion capabilities for their workstations in the future.

For those who value native Gen4 support, look no further than the recently-unveiled TRX40 series. Available in four models which are the TRX40 AORUS XTREME, the TRX40 AORUS MASTER, the TRX40 PRO WIFI, and the TRX40 DESIGNARE, these boards are PCIe 4.0 ready and designed to minimize impedance so that users can utilize their PCIe 4.0 devices at their full potential and enjoy true PCIe 4.0 performance. The motherboards further pack the ultimate power design and pair it with an equally impressive thermal solution to stabilize those thermal issues that often come with higher transfer speeds.

To keep creators up to speed with the next-gen technologies, the TRX40 AORUS XTREME also features the Server-Class Intel X550-AT2 chip which allows for dual 10 Gigabit Ethernet connections, perfect for supporting the high-bandwidth communication and transfer needs of professional creators. The XTREME variant further comes with the AORUS Gen4 AIC Adaptor, with which users can take full advantage of the native PCIe 4.0 speed provided by the AORUS motherboards to unleash the ultra-fast speed of M.2 SSDs.

For gaming enthusiasts who do live streaming and produce digital content online, the Z390 series and the X570 series motherboards are two great upgrade options. In addition to supporting the latest generation of CPUs on respective platforms, the Z390 and X570 also offer AORUS Memory Boost in the BIOS, allowing users to boost read/write performance by 4%, delivering better performance to the content creation.

Both of these boards offer the ability to accessorize with the new AORUS Liquid Cooler series for superior cooling of the fastest high-end CPUs. This next-gen AIO cooling solution also features a stylish, LCD display pump cap with gaming aesthetics for users to customize and deck out their system.

Creators who have to travel constantly, whilst seeking mobility and on-demand performance, the brand new AORUS RTX 2080Ti Gaming Box is the perfect companion to their portable computing devices. Aside from its beastly graphics performance capable of gaming and rendering 3D models on the go, the AORUS RTX 2080Ti Gaming Box is the world's first external GPU with a built-in, all-in-one water cooling system to keep the GPU running cool and silent in such a uniquely small form factor, a true testament to AORUS design ingenuity. The water-cooling design gives way to superior cooling, while maximizing performance available without all the distractions and noise that comes with fans. It also offers extra ports to connect all those peripheral devices.

Whether the purpose is to have the freedom to create or the most immersive gaming experience, GIGABYTE AORUS is here to provide creators and prosumers in general with the highest performing hardware. Entering the next decade of personal computing, GIGABYTE AORUS invites everyone to Team Up and Create On!